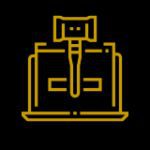 Tuscaloosa Bail Out was established to address the disproportionate impact of the cash bail system on communities of color and vulnerable populations in Tuscaloosa County, Alabama. Tuscaloosa Bailout works to abolish cash bail which, in its eyes, criminalizes poverty and disproportionately affects the Black community, the LGBT+ community, and communities of color. Tuscaloosa Bailout envisions a world in which racist and classist systemic barriers such as cash bail are no more and liberation for all oppressed peoples is realized. All money raised by the Bail Fund goes directly towards bail and other support —advocacy, reentry items, rides to court—for people incarcerated in Tuscaloosa. Volunteers from the Tuscaloosa Bail Out regularly visit the county jail to meet with potential clients and help them complete needs assessment surveys and consent forms, while also providing bail money to those who are eligible. If you are in need of assistance with bail or being jailed in the Tuscaloosa area, Tuscaloosa Bail Out can be contacted through the links provided.